So Giuliana Rancic decides to make a comment that Zendaya’s dreadloc hairstyle for the Oscars looked like they smelled of Patchouli oil or weed…this coming from someone who always gets flack for being so frail and skinny. Really though?! Who the hell are you to judge people on their outfits?  Where is your fashion line? Your fashion degree?

I’ve always disliked Fashion Police because I felt like it was four undeserving individuals sitting back and talking pure trash about people on national television to get ratings. Much like the “Cool kids” did in HS to be the most popular kids in school. Kelly Osborne and Brad Goreski have credible careers in the fashion industry, but Giuliana Rancic credentials are television personality and journalists. I’ll take their criticism over hers any day.  Kathy Griffin, with her mediocre comedy, doesn’t even begin to fill the spot that Joan has left behind. Joan Rivers was the only one who made it comical. Even though sometimes I didn’t agree with her humor, her experience in the business made everyone feel honored by her ridicule. I don’t get that, but hey, I’m not in Hollywood.  But I digress…

The hosts of Fashion Police have made their place in Hollywood, and have become legit in the fashion industry…some of them.  These folks have made their career out of smiling in these people’s faces then going on TV and verbally bashing them with that same fake smile they greeted them with on the red carpet. Sounds a lot like back in the day when we were walking the halls in school, putting books in lockers and waiting for the bell to ring for the next period. Mean girls with a paycheck.  I’m sure if the shoe was on the other foot and these stars were to comment on their fashion choices, hair styles, weight (or lack thereof), plastic surgery or lack of comedic career they would be singing a much different tune. Kelly has a makeup line, along with her mother with MAC beauty products that is amazing not to mention her work with Project runway and Project catwalk.  Brad Goreski, is a celebrity fashion stylist with clients like Jessica Alba, Demi Moore, not to mention his own show on BRAVO. These two would be the ONLY two judges on that panel that I would be willing to take criticism from. They know their stuff and have the resume’s to prove it. But why not use your credentials in a positive way? 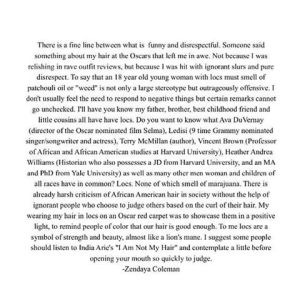 I can say, however that the way Zendaya handled and commented was classy and elegant, not to mention quite mature for her age of 18.  The youngest and evidently the most mature out of a panel of “adults” have shown how to handle the situation with grace, without verbally tearing down those who commented against her. Brava, Miss Lady! I love the way you handled that comment. She is one of few positive role models for the kids growing up today who has never has anything bad to say about anyone. Her fashion sense is always on point, and she always dresses appropriate to her age. She has done many things to help make a difference in this world and be an example for kids to do the same.  In a world where former Disney star Miley Cyrus is on stage smoking weed and giving BJ’s to blow up dolls, I would think Mrs. Rancic would have good things to say about her and find her refreshingly different. But I guess “Google” isn’t working in your office on your computer at E! News. 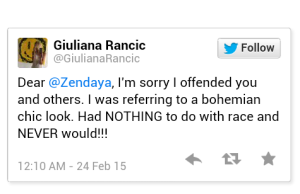 I didn’t feel like Giuliana’s “apology” was sincere or touched the actual reason she was offended. “I was referring to the Bohemian chic look?” That’s what you were talking about when you said she looked like she smelled of Patchouli oil or weed? One has nothing to do with the other, sweetie. Would you say the same if Lauryn Hill, India Arie, Whoopi Goldberg or Malcolm Jamal Warner, respected people in the business would have the same odor? But when Kylie Jenner or Christina Aguilera (no shade) wore the look on the red carpet, you sang their praises for being edgy and fashion forward. You have absolutely NO idea what natural black hair or locs are about. Your comment offended many, not just Zendaya and her team. That so-called apology was not sufficient. I have the up most confidence that the E! Network is busy in their newsroom doing damage control and making sure that Giuliana Rancic comes out smelling like roses at the end of the day. I think Zendaya deserves a true, heartfelt apology, not one that Ken Baker has helped orchestrate. Talk to your PR team about how to clean up your mess properly.

A Single Gal in her 30's living in a big city with a lot on my mind. Nothing is off limits...let's talk about it! View all posts by Cerise Jackson