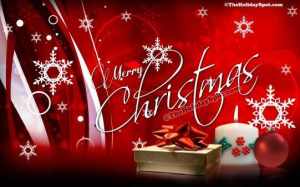 There is this huge controversy over the words”Merry Christmas vs. Happy Holidays” in the retail world. Employees are told to say “Happy Holidays” to be more “politically correct.” Nonetheless, people get mad when you say “Merry Christmas” because they feel like you aren’t observing other holidays; i.e.  Kwanzaa and Hanukkah. Others are upset when you say “Happy Holidays” because they feel like it takes the “Christ” out of Christmas”, which I personally agree with. I experienced this controversy head on one day, while working in Target one year as I checked a young man and his friend out. Apparently he was Muslim and he felt like I shouldn’t have told him Merry Christmas but Happy Kwanzaa instead. Then he proceeded to inform me that his son isn’t getting anything for this “Christmas” but is learning what the importance of Kwanzaa is, and will be receiving  his presents then, and if I was any kind of African American I would do the same instead of feeding into the “White Man’s Holiday”. Instead of getting mad and telling him what he could really do with his “attitude of ‘Brotherhood'” I simply let God take over, smiled, and politely said to him, “Merry Christmas and I hope you have a very good New Year as well.”

When did Christmas get so complicated? When did such a season that is supposed to bring nothing but joy, bring in confusion and anger? It seems as though “Merry Christmas” has never been a problem in the past, but more and more people seem to feel like they need to protect their religion more each day. I feel like this. In every Religion that everyone has, God and his son Jesus are a part of it somewhere. And obviously to some extent, everybody believes in God and Jesus. And there would be no Christmas or reason to celebrate this time of year without him. There is no Christmas without Jesus Christ. Period. Otherwise it would be called “National-give-people-presents Day”. Secondly, if you’re so upset about people saying to you “Merry Christmas”, stop spending so much money in the mall or department store lines on Christmas presents– that’s hypocritical. Go out and celebrate your holiday, on the day that it is observed on. Lastly, your religion is yours and my Christianity is mine. Don’t force your beliefs on me just because you think the way I celebrate is wrong. Keep your drama to yourself.

This doesn’t mean that I find other religions less important than mine. It’s not that serious to me. Whether it’s Hanukah that you observe, Kwanzaa, or you don’t celebrate Christmas at all, we all celebrate our love, family, and friends in one way or another. That’s what this time of year and basically the month of December is all about anyway right? Any religion this time of year is about giving, spending time with their family and showing them the love and care that they have been showing them all year–what difference does the label of religion make? Bottom line at the end of the day, when the presents have been unwrapped, the Christmas music has played its last song, the candles have been blown out and the plates from the family dinner are in the dishwasher, it’s all about who your are, what you believe in, and who you pray to, to show thanks for allowing you to see another wonderful holiday before you lay your head down to rest.

Finally, whatever religion you are, and whatever it is that you believe in, I hope that your Holiday is the best one you’ve had yet. I’m not saying that what you believe is wrong, I’m just asking that you keep your opinions about what I believe to yourself. Merry Christmas!

A Single Gal in her 30's living in a big city with a lot on my mind. Nothing is off limits...let's talk about it! View all posts by Cerise Jackson